Saturday 25th March was our last fixture, this was a versatility tournament with all teams playing. We only had 6 players this week but they worked together very well and their skills improved as the tournament progressed. We lost our first game to Poole Sapphires but won the next three matches and only lost the last match against Bournemouth by one goal. We finished the tournament in fourth place, well done!

In the league we finished in 3rd place only losing to the winners and runners up, this was our first season playing in the Poole League, what a  great result, well to everyone.

The last trip to Poole today for the winter season where all the teams played a versatility tournament.  The team were Abi, Anna, Eleanor, Ellie, Holly, Lucy, Phoebe and Sophie.  They had four 8 minute matches, playing conditions were good.  This tournament proved to be interesting from a coaches prospective.  The team played well and several players will now be considered for new playing positions.  The players have enjoyed playing in the Poole league even though there were no wins to be had, they had some close games.  Looking forward to the next season......bring on the summer!!
Poole League Match Report Saturday 25th February 2017

With illness and some players not being available the U14’s only had 6 players, Poppy from the U12’s kindly said she would come along to make the team up to 7, their first match was against NDNC Lightening, the defence, Ellie, Eleanor and Poppy worked extremely well together getting many intercepts, but sadly we didn’t convert our shots and missed more than we scored, all players gave 100% and Poppy was a star, the final score was 5-7
The second match was against Bournemouth; they are a very skilled team and converted 98% of their shots. We gave our best but heads went down a bit in the second half, we did get our chances to score but sadly only converted one. This team has improved tremendously throughout the season and Holly as captain has encouraged and helped the team at all times, the final score was 1-24.
High Fives

Cold but dry morning, our first match was against Bournemouth who we lost to in the first half of the season, so we were up for the challenge, we were winning at half time, but after the rotations their shooters didn’t miss and we missed five shots, the game finished 4-5, this was a great improvement from the last game were the difference was 11 goals, the team gave 100% very well done.
Coaches Player of the match -  Bella
Opponents Player of the match - Jasmin

The second match was against Verwood and this was very difference, we stared well and finished well, all players worked well together and we converted 65% of our shots, we won 8-0.
Poole League Match Report Saturday 14th Jan 2017

The H5's drew their first match 3-3.  They played well.  Their second match was a strange event.  They were winning 8-0 at half time and went on to win the game 8-4.  Definitely a game of two very different halves.  Players player game 1 was Bella Dawe with coach’s player being Ryan.  Second match player’s player was Keely Ringwood, coach’s player was Libby.  Both games were played in a strong confident manner.

The under 14's played Poole Pearls and Poole Rubies.  Two very strong teams.  Our girls tried really hard to make a second phase move, which is what they had worked on at training and their movement has improved hugely.  Good effort girls.  They kept their spirits up and fought to the end, but sadly lost both games 17-6 and 30-1.
​
players player and coaches player 1st match Ellie Ringwood, players player 2nd match Abi Hill, coaches player Anna Boucher.
14th November 2016

The second match was against NDNC lightening.  Still raining.... the girls showed much improvement with their passing and movement.  At half time the game was theirs for the taking at 5-3 down.

If all the shots at goal had been successful they would have won the game by a large margin, but it wasn't to be, they lost 10-4.
​Players players and coaches player was Holly Davidson (wa) well played Holly. Babs.
15th October 2016

High Fives
This team played their first match of the season against New Forest Rainbows and WON 5-1 ,what a great start, there second match against Bournemouth was more challenging  and they lost 2-13, but they didn't let their heads drop and all team worked really hard throughout the game producing some excellent skills.
Players of the match: Ryan & Jemima
Coaches Players of the match: Libby & Ryan.
Well done

U14'S
The under 14's had two matches and had a squad of 8, their first against Poole Crystals and their second match against Poole Pearls, both teams were very strong and put us under a lot of pressure, but the girls played well  and there is definitely a lot of potential  in the team.
Coaches Players of the match:  Sophie & Holly,
Well Done

The weather was kind to us and we look forward to the next match on 12th November.

Photo - U14 team with their Coaches Babs & Emily 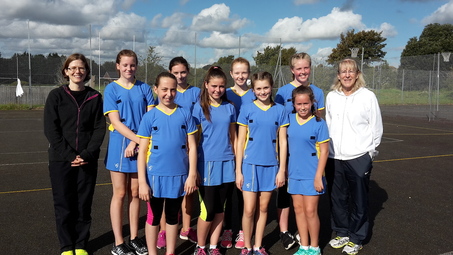